Why Eat a Rock? Gastroliths (‘Stomach Stones’) as Trace Fossils


During the past 30 years or so, trace fossils – such as tracks, burrows, nests, toothmarks, coprolites (fossil feces), and so on – have been steadily gaining more respect and recognition in paleontology. I would like to think this is a direct result of my dedicated “ichnoevangelism,” in which I have attempted to convert The Great Unwashed who fail to see the paleontological truth inherent to trace fossils, but the world of paleontology is much bigger than the Church of Ichnology (so far). Nonetheless, despite this overall increase in enlightenment, one type of trace fossil still causes some recalcitrant non-believers to turn gazes elsewhere and ignore their scientific worth. Those would be gastroliths, otherwise known as “stomach stones.” 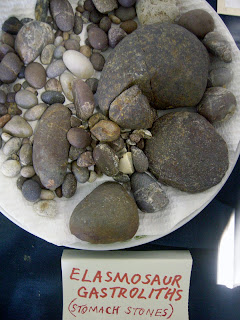 Gastroliths extracted from the interior of a Cretaceous elasmosaur (a large, long-necked marine reptile) in central Queensland, Australia. Specimens are at the Stonehouse Museum and collected by “Dinosaur” Dick Suter in Boulia, Queensland. I know, they just look like a bunch of rocks, not trace fossils. Please read on, and prepare to learn.

I was reminded of this ichnological inequity while traveling in Queensland, Australia this past July (2010), noting three modest displays of these enigmatic trace fossils. One was in the tiny town of Boulia, another in the much bigger town of Mt. Isa, and the third in the tiny-but-still-bigger-than Boulia town of Richmond. The gastroliths in Boulia and Richmond had been directly associated with the skeletal remains of elasmosaurs, marine reptiles that lived during the Cretaceous Period (about 100 million years ago) in this part of Australia. The gastroliths seen in Mt. Isa, though, were in the gut region of a dromornithid skeleton. Dromornithids were large flightless birds – distantly related to ducks and flamingoes – that lived during the latter part of the Cenozoic Era, from about 25 million to only about 40,000 years ago. 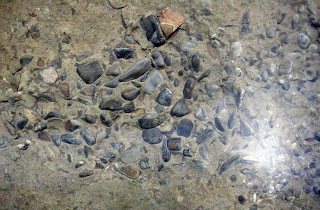 Gastroliths associated with the gut region of a fossil dromornithid. Specimens on display in the Riversleigh Fossil Centre in Mt. Isa, Queensland.
Outside of Australia, gastroliths have been found in a few species of dinosaurs, too. So why were these gastroliths present in Mesozoic marine reptiles, dinosaurs, and Cenozoic land birds?
Oh wait, sorry about that: I never explained the term “gastroliths,” other than to say they were “stomach stones.” That’s not very helpful, so I’ll back up and get more basic. Gastroliths are rounded rocks that, for whatever reason, end up in an animal’s digestive tract. Why would an animal swallow a rock? Two reasons come to mind:
(1) Accidental ingestion, in which a rock that was too close to some food and went along for the ride. (This is how we get some of our beloved pets to take pills they otherwise would never find appetizing.) In dinosaurs and ancient birds, some paleontologists have also proposed that they (the rocks, not the paleontologists) might have been inadvertently consumed while carried in mouths during nest building.
(2) Deliberate ingestion, in which an animal knowingly (instinctively) sees a delectable rock and swallows it, for reasons that will be further explained soon.
Determining which of these two scenarios happened with a fossil animal is a matter of numbers, as in, how many stones are preserved in the gut region of a fossil animal. Odds are that accidental ingestions should be unusual events, considering the low nutritional value of most rocks (not to mention their lack of fiber), as well as the potential for choking on them, which would negatively impact future reproductive success. As in, when you’re dead, you don’t get to pass on your genes, and choking uncontrollably probably isn’t sexy enough to attract many mates, either. (But if it works for you, hey, knock yourself out – literally.)
This means that gastroliths should be absent or rare in animals that did not intentionally eat them. Then again, a high concentration of rocks in a relatively small area within the main body cavity of a skeleton implies that these were repeatedly swallowed for good reason. This circumstance also implies that this seemingly odd behavior actually was not so strange and provided some adaptive advantage to that animal.
OK, so what are the benefits of purposefully swallowing rounded rocks? To answer this, paleontologists turn to our good friend uniformitarianism (or its less syllabic synonym, actualism), in which modern animals teach us about gastroliths and how these animals use them. For example, we can easily observe chickens (chooks), budgerigars (budgies – not to be confused with budgie smugglers) and other small birds seeking out grit, pebbles, and other small stones and swallowing these. Much larger flightless birds, like emus and ostriches, do the same, and accordingly pick a wider size range of stones. This practice is linked to aiding digestion; the gastroliths lodge in the muscular crop or gizzard of a bird’s digestive tract and are then used to grind down any tough-to-digest food that passes through the same place.
American crow (Corvus brachyrhynchos) picking out some pebbles and swallowing them, presumably to help it digest some food. Footage taken in Vancouver, British Columbia, which is in some country just north of most of the continental U.S. (Sorry, I’m American, hence my lack of geographical knowledge.)
As yet another example of how modern birds are theropod dinosaurs, several theropods from the Jurassic and Cretaceous Periods – Lourinhanosaurus, Caudipteryx, Nqwebasaurus, Sinornithomimus, and others - have beautifully preserved masses of gastroliths in their gut regions. Strict carnivores tend not to need gastroliths, though, so their presence in these theropod dinosaurs points toward their probably having had a more varied diet as insectivores, omnivores, or even herbivores. 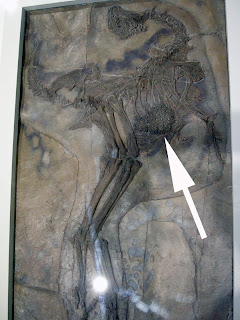 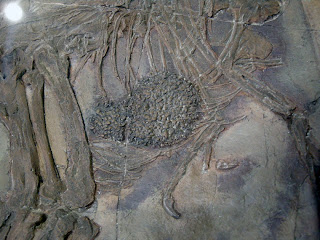 Gastroliths in the gut region of the small theropod Caudipteryx zoui, with an overall view (top, arrow pointing to gastroliths) and a close-up of the gastroliths concentrated in its abdominal region (bottom). Replica (cast) on display in the Carnegie Museum of Natural History in Pittsburgh, Pennsylvania.
Gastroliths have been interpreted in other types of dinosaurs, including a few ornithopods, sauropods, and ceratopsians, but are rare enough that they must not have been needed in most dinosaur species. Dinosaur paleontologists also acknowledge the possibility that larger carnivorous theropods might have secondarily ingested some gastroliths by eating a gastrolith-bearing animal. But as far as I know, this idea has not yet been convincingly supported as a genuine evidence-based hypothesis.
Animals also had to be discriminating about what rocks they gulped down. For example, what if a sauropod spotted a rounded cobble of limestone and thought (as much as a sauropod could think), “Wow, that’ll help grind my food!,” and gobbled it down. Well, limestone is composed of CaCO3 (calcium carbonate), which is present either as the minerals calcite or aragonite. A simple test for these minerals, conducted in introductory geology labs worldwide, is to simply apply a drop or two of diluted acid to a rock suspected of being a limestone. If the rock fizzes like a sparkling Shiraz, then it’s definitely limestone: the acid is liberating the CO2 in the CaCO3, and the bubbles you see are composed of that gas.
Chemical reaction caused by adding dilute hydrochloric acid (HCl) to calcite. Gee, I wonder how a limestone cobble – composed of calcite – might have fared after a few minutes in an acidic gastrointestinal tract?
So now imagine the acidity of a typical sauropod stomach, which might have had a pH of < 3 (on a scale of 1 to 14, with 1 being the most acidic). What do you think would have happened if a limestone cobble slid down into such a gut environment? Yes, that’s right: the Mesozoic equivalent of Alka Seltzer. Other than for self-medication (rather unlikely), I just can’t see how eating limestone would have benefited a sauropod or any other dinosaur, because the rock would have dissolved too quickly to be used in a gastric mill.
And sure enough, most undoubted gastroliths are rocks composed of silica-rich minerals (chert, quartzite, quartz sandstone), which are more chemically stable than calcium-bearing minerals and resist chemical weathering from most acids. The bigger of such rocks also tend to be rounded: sharp corners would have had a tough time going down a gullet, or been painful enough to discourage doing something like that again, even on a dare. (“Come on, mate – bet you can’t swallow that big, spikey rock!”)
What modern animals – other than birds – have gastroliths? Perhaps surprisingly, some crocodilians have gastroliths, which also help with digestion, but further serve as ballast for buoyancy control when swimming. In the wonderful world of invertebrates, freshwater crayfish (also known generically as yabbies in Australia) have gastroliths, too. However, these are radically different in purpose compared to gastroliths in vertebrates, as they are secreted directly by crayfish and are related to maintaining a proper balance of calcium in their bodies.
What’s great about gastroliths as trace fossils is that we now know a lot more about them and their functions in some modern animals and dinosaurs because of intensive research on this topic in the past 10 years or so. Nevertheless, their scientific importance as trace fossils in marine reptiles from the Mesozoic Era – particularly in some Cretaceous plesiosaurs of Australia – is only just now being recognized. So that will be the subject of the next entry: their probable uses in big sea-faring reptiles 100 million years ago in Australia. 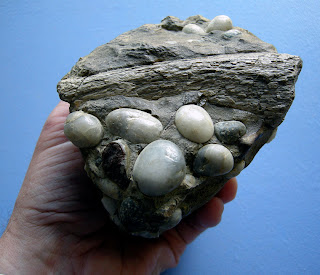 More great examples of Cretaceous gastroliths at the alliteratively (albeit illiterally) named Kronosaurus Korner in Richmond, Queensland (Australia). Notice the chunk of an elasmosaur rib just above these, showing how they likely were inside the elasmosaur. I wonder why?
In closing, as we reflect on the ichnological importance of gastroliths, I leave you with a song by Australia’s most famous balladeer, John Williamson, dedicated to the most beloved of gastrolith-using large flightless birds in Australia, the emu (Dromaius novaehollandiae).
Old Man Emu, written and performed by John Williamson, along with a visual tour of some of Australia’s most iconic terrestrial animals. Now if only someone would do a version that included Mesozoic animals of Australia…
Posted by Anthony Martin at 11:42 AM