After spending a night in the paleontologically delightful town of Hughenden, my wife and paleo-companion Ruth and I were off to Winton, about 215 km to the southwest.

I had visited Winton once before in 2007, but for only a day and night. Nonetheless, the trip there was so memorable (and why is another story), I had vowed to come back, and was eager for Ruth to visit it with me. Based on my all-too-short foray, I reckoned its combination of paleontology, bush poetry, cowboy culture, ample beer, and welcoming folks would be a winning blend for both of us. So we were prepared to stay a while to better soak up the unique flavors of this place.

We arrived in town early afternoon on Wednesday, June 30 2010, just after the start of the antipodal winter on a gorgeous blue-sky day, and promptly checked into the North Gregory Hotel. I had also stayed at the North Gregory during my previous trip, the main reason being that this was the site of where Waltzing Matilda was first performed in public, in 1895. Was this the original hotel, you ask? Well, no, and neither was its previous incarnation: three fires had wiped out three earlier hotels, including the original one. Hence the designation of this as the “site” where Waltzing Matilda was played. Place is important, as is memory. 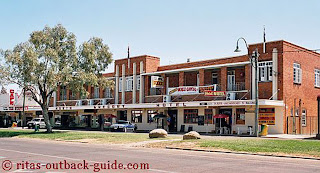 The North Gregory Hotel, site of classic songs, fires, beers, paleontology, and other essential facts of life in the outback of Queensland, Australia. Photo is from Rita’s Outback Guide.

With only a few hours of sunlight left, we had a decision to make about our afternoon in Winton: Australian culture or Australian fossils? Our typical eclectic (or is it hedonistic?) attitude of “having our cake and eating it too” held sway, though, so we did both.

First we walked across the street to the Waltzing Matilda Centre, which claims that it is “the only centre devoted to a single song.” (I have little doubt that this assertion is correct, so you should likewise feel no urge to use “The Google” on “the Internets” to find out whether it is true.). The display there does indeed supply a thorough history of the composer Banjo Patterson and how Australia’s most famous song originated (like many songwriters, he was trying to impress a sheila). But Ruth was most impressed with a separate art gallery in the centre, which featured Australian-themed art from local artists.

The beauty of a small town like Winton is that we just had to walk back across the street to sate our thirst for paleontological knowledge. (Also beautiful was that beer could be had on both sides of the street.) The historic Corfield and Fitzmaurice Building, which used to be the town’s general store, is where you go to see fossils in downtown Winton. To see the largest dinosaur bones in Australia, which are coming out of the ground near there, you have to drive a little ways (about 15 km) east of town to the Australian Age of Dinosaurs, and to see a world-class dinosaur tracksite (Lark Quarry), you have to drive a lot more (about 100 km) to the south of Winton. (Do you think that’s enough foreshadowing of the next two blog entries?) 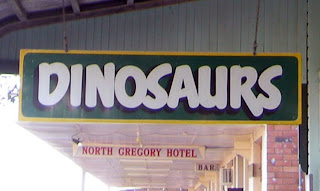 Dinosaurs, the North Gregory Hotel, and a bar! Winton has it all, including an abundant supply of XXXX. No, it’s not what you might first think, but as the Australian joke goes, “It’s how you spell ‘beer’ in Queensland.”

Despite what looked like a small place from the outside, we were impressed with what awaited us inside, all for just a small entrance fee: a nice collection of local fossils (many Cretaceous), and a locally produced diorama that recreated an event from the Cretaceous Period, 95 million years previously, recorded in the aforementioned dinosaur tracksite south of town. 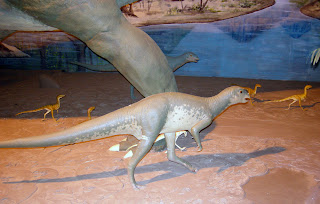 “Excuse me! Pardon me! We really must be going!” There’s something about a large theropod walking through your neighborhood that invokes a bit of anxiety in a wee dinosaur.

The diorama in the Corfield and Fiztmaurice Building represents a labor of love, depicting in dramatic detail the interpreted scenario of the Lark Quarry tracksite. In it, the artisans reproduced the probable environment (a muddy lakeshore), a few representative dinosaurs that made the tracks – including one very imposing (and rather portly) theropod – and a bunch of dinosaur tracks, looking as if they were made yesterday, when actually they were made sometime in the past few years. 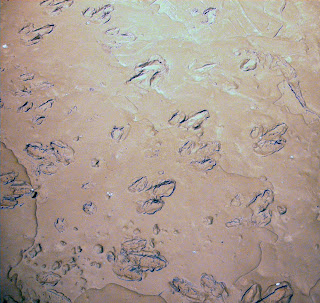 Dinosaur tracks, recreated in downtown Winton and representing tracks from a large number of small dinosaurs, with the real thing (a dinosaur tracksite) about 100 km south of town. I wonder why most of those tracks are heading in the same direction?

The diorama even include a bit of speculation (as far as I know) that one of the small ornithopod-dinosaur trackmakers slipped and fell into the mud, leaving it vulnerable to victimization, whereupon the large theropod set upon it in a most rapacious way. In other words, it got eaten. 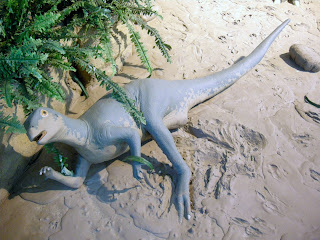 Bloody hell – all me mates left me here in the mud for that theropod! (Too late, this small ornithopod discovers that there’s no mateship in the Cretaceous.)

Other than the diorama were fossils, and perhaps the most impressive is a sauropod femur in a display case, which I recall belongs to the sauropod dinosaur nicknamed “Elliott.” This prodigious bone was set alongside the femur of an adult bull (Bos taurus, male version). Considering the cowboy culture of the area, this made for a brilliant contrast, easily understood by nearly any visitor educated in bovine anatomy.

That’s not a femur.

But there was much more than dinosaurs here for a paleo-enthusiast to marvel. How about fossil plants? There were some of those, and as a great two-for-one special that pleased this ichnologist very much, a Cretaceous fossil leaf had a leaf mine preserved in it, where a larval insect burrowed below the leaf cuticle as it chowed down on some yummy mesoglea. How cool is that? These sorts of trace fossils can lend to insights about the original ecosystems in which the dinosaurs lived. 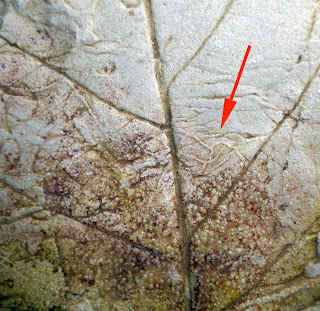 It’s a body fossil (a deciduous-tree leaf) and it’s a trace fossil (the leaf mine in the leaf, indicated by the arrow), coming from Cretaceous rocks of Queensland.

Some trace fossils on display that were not from the Cretaceous, but much more recent (I suspected Pleistocene) were labeled as “Sea Wasp Eggs. Leftopius duponti. Loc. S. Aus.” Yet they looked very much like some insect trace fossils I had seen from Argentina, like beetle pupal cases. So I took this picture and looked up the name later (yes, using “The Google” on “The Internets”), and was gratified to see that they were indeed pupal chambers, they are interpreted as the works of the Pleistocene weevil Leptopius duponti, and they have been reported from South Australia and northern Queensland. 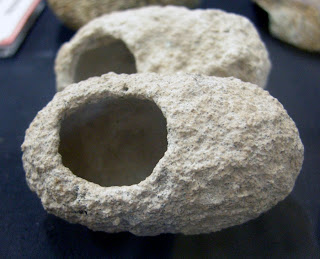 “Sea-wasp nests”? No on all of those words, but they’re still very interesting trace fossils. These were made by Pleistocene weevil larvae, and found in South Australia and northern Queensland.

And even though dinosaurs were the paleontological stars of this exhibit, I was pleasantly surprised to see the skeleton of an old (but not quite a fossil) northern hairy nosed wombat (Lasiorhinus krefftii) on display, nicknamed the “Winton Wombat.” This wombat became famous within the Australian paleontological community when its bones were found in between some sauropod dinosaur bones at a dinosaur dig site near Winton. 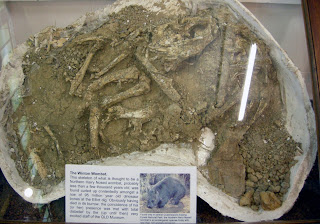 The “Winton Wombat,” a northern hairy nosed wombat that burrowed down next to some dinosaur bones and died in its burrow just so it would confuse some paleontologists a few thousand years later. Cheeky bugger.

Was this a creationist dream come true, where modern mammals and dinosaurs lived at the same time, then were mixed together by a Noachian flood just before burial? Well, as we like to say in the southern U.S.: “Not just no, but hell no!” Here’s a really simple explanation, in three parts: (1) wombats are very good at burrowing; (2) this wombat burrowed down to the level of some 95-million-year-old dinosaur bones near the surface (which, as a matter of fact, is where they are found today); and (3) the wombat died in its burrow. Or, a miracle occurred. Your pick.

So what was next on our quest for furthering our paleontological education in the Winton area? How about a visit to the most exciting recent development in Queensland paleontology, the Australian Age of Dinosaurs Centre? See you there next week! 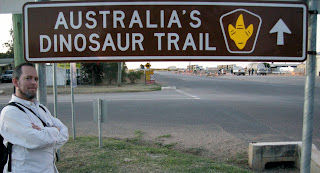 The theropod track on the sign would not lie: when you’re in Winton, you’re on Australia’s Dinosaur Trail.

Posted by Anthony Martin at 7:32 AM