About six weeks ago, I shared the happy news of our discovering dinosaur tracks at Milanesia Beach, Victoria, which turned out to be the largest collection of polar dinosaur tracks known in the Southern Hemisphere. Those tracks were found during the month-long excursion (May-June 2010) along the Victoria coast that inspired the start of this blog. And although we found heaps more trace fossils, the tracks constituted out most important scientific find. So even though we have a but more science to do, this is as good of a time as any with this blog to say, “Catch you later” and make a transition both geographical and temporal. 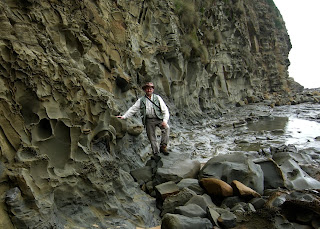 The Great Cretaceous Walk has been very, very good to me. But it’s time to take a pause in all of the walking and talking about the Cretaceous of Australia, and look closer to home (Georgia) and at this time in the present (otherwise known as “now”). Photo by Tom Rich, and taken on May 28, 2011 (Day 2) of our month-long field survey of the Cretaceous trace fossils of Victoria.