The fossil thieves drove their sport ute into the Western Australia outback in the middle of the night, confident that no one would see them. Just to make sure, though, they turned off their headlights the last kilometer before their destination, using moonlight to keep their tires on the unsealed road. Once at the site, they used torches (flashlights) to search the ground, and quickly found what they were seeking. They pulled out a portable rock saw from of the back of the vehicle and cut through the 120-million-year old sandstone, the abrasive sound masked by nearby waves crashing during high tide. The sandstone bed was thick, but split evenly along its bedding plane so the thieves were able to use a lever bar to pry up each square. These blocks were heaved onto the truck bed; blankets were used to cushion them below and cover them above. The perpetrators got into the truck and sped away from the site, well before the first rays of the morning sun revealed the newly made and oddly square holes in the rock. They had just taken some of the few stegosaur tracks known from the geologic record, and they had stolen these from aboriginal tribal land. It was both a crime against the state and a grave insult to the people who regarded these tracks as part of their heritage. 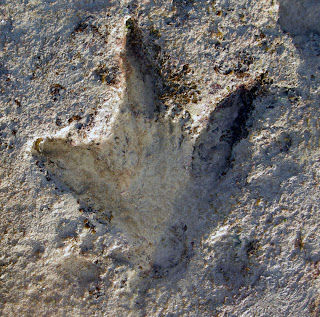 Nice dinosaur track you got there. It’d be a shame if something happened to it. Track is from a large theropod dinosaur, preserved in Early Cretaceous sandstone of Western Australia. Please don’t take it, legally or otherwise.
Read more »
Posted by Anthony Martin at 6:58 AM 5 comments:

Fossil Collectors and Academic Paleontologists: Grudge Match, Love Fest, or a Little of Both?

In July of 2010, while in the small outback-Queensland (Australia) town of Boulia – mentioned in a previous entry – I was reminded through one simple question about a huge cultural and communicative gap dividing many people otherwise connected through their mutual love of fossils. The question, posed to me by Dick Suter, an extraordinary fossil collector who lives in Boulia, was: “Do you have a Ph.D.?” I have heard this question before in both the U.S. and Australia, and it is almost never asked out of curiosity, but to pick a fight. This time was no different, as I sensed his inquiry was tinged with antagonism. I braced myself, and said, “Yes.” 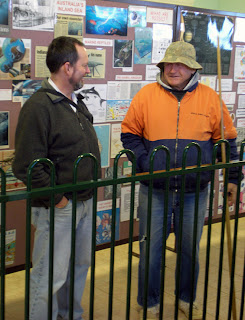 Here I am, having a cordial conversation with fossil collector Dick Suter (right) of Boulia (Queensland, Australia) at the Stone House Museum. He was a great guy and had lots of paleontological experiences to share during our visit with him, for which we were grateful. Just don’t tell him you’re a paleontologist and have a Ph.D. Photo by Ruth Schowalter.
Read more »
Posted by Anthony Martin at 7:26 AM 7 comments: