The Case of the Mistaken Dinosaur


Like all stories in paleontology, that of Lark Quarry – a world-famous dinosaur tracksite in Queensland, Australia - starts in the geologic past; in this instance, during the Cretaceous Period, about 98 million years ago. The cast of this tale consisted of about 150 dinosaurs, played by:
• One species of a large herbivorous dinosaur (an ornithopod), who was a mere bit actor, making a cameo appearance before the main act.
• Two species of small dinosaurs – one a theropod and the other an ornithopod – who made up most of the cast; and
• The star of the show, a tyrannosaur-sized theropod, who made a grand entrance toward its climatic finish.
The story is filled with dramatic flourishes, of a tranquil scene shattered by brutal carnivory, and of a quiet Cretaceous lakeshore becoming a killing ground. The former lakeshore, though, left no bodies, only tracks. So we have to reconstruct what happened there by using the oldest science known to humankind, ichnology: the study of modern and fossil traces. 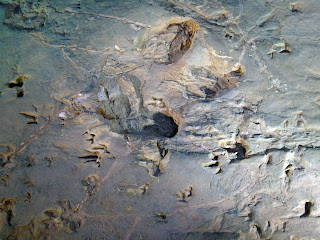 A small sample of the 3,300 dinosaur tracks of Lark Quarry in Queensland, Australia, showing evidence for three species of dinosaurs that either walked or ran along a Cretaceous lakeshore 98 million years ago. Who made these tracks,  what behaviors do they represent, and how were the trackmakers’s behaviors related to one another? That is the mystery – and now the controversy - of Lark Quarry.
The curtain opens, revealing a subtropical lakeshore, and the large ornithopod, similar to the Australian dinosaur Muttaburrasaurus langdoni, lumbers onto the dimly lit stage, emerging from a fog. His arms are long and almost touch the ground, but all of his walking is done with the rear legs. He stops briefly, bellows a low-frequency, didgeridoo-like moan, turns to the left, and exits, enveloped by the mist. Several minutes slip by until the stage lights swell in imitation of a Cretaceous dawn. Insect-like buzzes and chirps intrude the silence, accompanied by bird songs of the Mesozoic.
Soon thereafter, small two-legged theropods and ornithopods, prancing and mincing, enter from Stage Right in twos and threes. They pay no heed to the presence of another species, as neither poses a threat to the other. They wander about and occasionally halt to sip water from the shoreline, but whether stopped or moving, they frequently pop their heads up, down, and around, ever alert to danger. The little theropods behave much like chickens in a, well, chicken yard (no need to search any further for a metaphor, I suppose). The ornithopods, most about the size of modern emus of various ages, also remind the audience of their modern analogs, especially if this production is taking place in Australia.
At some point, the insects, which had reached a cacophonous crescendo through their blended mating calls, suddenly cease, quickly joined in silence by the birds. This hush puts the theropods and ornithopods on high alert, the Cretaceous equivalent of DEFCON 2. They all look up and to the left simultaneously, where the quiet first descended and then spread like a wave. They begin to sniff the air, but do not succumb to full-fledged panic until they actually feel the danger in their feet. There it is, now felt by the audience as a Senssuround-like effect: the bass-profundo vibrations caused by each footfall of an approaching multi-tonne animal, coming from the left and offstage. Boom. Boom. Boom.
His imposing head appears first, with a mouth full of bladed teeth, and nostrils that snort steam into the cool morning air. The rest of the massive body appears with each halting step, his long tail held straight behind him, tiny arms dangling in front. After stopping once, he crosses his right foot over his left, stops again, and crosses his left foot over his right, then quickens his pace as a target is acquired. He is now stalking his prey.
Video of the BBC’s Walking with Dinosaurs production, in which “Big Momma” (a Tyrannosaurus rex) makes her presence known to Ankylosaurus and Triceratops while defending her little ankle biter. Footage was taken by me in Atlanta, Georgia (USA), but the production premiered in (and returned to) Australia. Now think of yourself as a teeny-tiny dinosaur and how quickly you would make some incipient coprolites before fleeing that scene.
The small dinosaurs react appropriately to such a rude interruption of their morning. As one panicked mind, they run to the left as fast as their little legs can carry them, straight toward and around the marauder. In the slippery mud, though, one ornithopod loses its balance and lands on its side, hapless against the assault and bleating like a sheep led to slaughter.
The theropod roars, pins its struggling prey underneath one 65-cm (26-in) long clawed foot, and lowers its head to deliver a final blow. The stage darkens, the curtain closes, and the audience erupts into applause. Peaceful reverie shattered by gruesome death, in which the fleet of foot and the strong survive, and the weak perish. What’s not to like?
Then, just as the applause begins to subside, the curtain opens again to reveal the star of the show, the villain/hero theropod. The audience applauds madly, thinking this is the start of the casting call. Only, their enthusiasm is curtailed abruptly when they realize that the theropod is not bowing, but is looking at them with a mischievous smirk. He winks, says a cheery “G’Day!”, and reaches up with one arm to his face. The people gasp as they watch his arm telescope and lengthen: this is not a tyrannosaur! 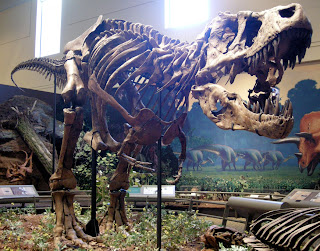 You thought I was this? HA! I actually look like this, mates: 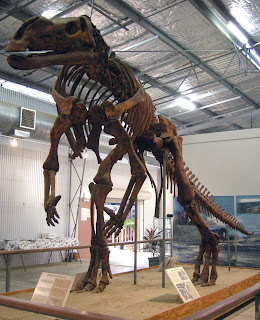 Well, you all look like a bunch of stunned mullets now, don’t you?
(First photo is of the type specimen of Tyrannosaurus rex, in the Carnegie Museum of Natural History in Pittsburgh, Pennsylvania (USA); second is of a reconstruction of the large ornithopod Muttaburrasaurus langdoni, displayed at the Flinders Discovery Centre in Hughenden, Queensland.)
Their shock is doubled when the “theropod” pulls off an elastic mask, revealing that it was, all along, the big ornithopod seen at the opening of the play. With that, Kabuki comes to the Outback, and Hannibal Lecter is instantly transformed into Tootsie. Within seconds, rotten vegetables and fruit, carried in by the otherwise affluent-looking crowd, shower the stage. Boooooo! Hissssss! The curtain closes, and a full-fledged riot erupts.
(Incidentally, for those of you who think this would be a fantastic story to recreate, especially using hand puppets, be my guest and put it on YouTube. Or, even better, make it into a full-fledged musical production, like Jurassic Park: The Musical. Just be sure to credit me for the idea, as in, “Based on a beer-induced hallucination by A.J. Martin.")
With that dramatization in mind, imagine it being retold thousands of times, inspiring: museum dioramas; artwork; animated recreations; dramatic scenes in mainstream movies; a specially designed building; and national-heritage status to preserve the dinosaur tracks that made the story possible in the first place. Except, omit the very last scene – you know, the one that pulls the rug out from under its adoring public – and let it be told incompletely for decades.
So what happened? How did we miss such an important part of the story? Well, ichnologists, like any other scientists, generate new observations every year. These observations result in more data and fresh perspectives that have the potential to overturn or otherwise revise old hypotheses, including ones we enjoy very much.
This is exactly what happened with Lark Quarry. Based on newly gathered and analyzed trace fossil data – done by Anthony Romilio and Steven Salisbury of the University of Queensland, and published in the journal Cretaceous Research – the large “theropod” tracemaker is now interpreted as a large ornithopod. Hence the new hypothesis states there the “dinosaur stampede” was not triggered by the arrival of a large predator, and no stalking of a small dinosaur by such a voracious predator took place, either.
The story of Lark Quarry and its dinosaur tracks illustrates very well a constant feature of science, which is that it is always evolving through self-correction. This principle was certainly realized in a big way with evolutionary theory, gravitational theory, plate tectonic theory, and quantum theory. Lots of testing, scrutinizing, and arguing took place before the majority of the scientific community accepted any of these grand schemes. And the same standard applies to hypotheses of all shapes and sizes, including dinosaur tracks and other trace fossils.
Indeed, the preceding overturning of long-held hypotheses by trace fossil evidence is not unusual. For example, just in 2010, fossil tracks from Poland, dating to the Early and Middle Triassic Period (about 245 million years ago), indicated that the immediate ancestors to dinosaurs were extant earlier than previously thought. Also in 2010, dinosaur dig-marks preserved in Cretaceous rocks in the western U.S. were linked to a raptor-like theropods. Even better, these dig-marks were directly associated with shallow mammal burrows, demonstrating a predatory behavior never before known in theropods. In my own research in 2009, I proposed the earliest known dinosaur burrows in Cretaceous rocks of Victoria, Australia, one of which was eerily similar to the first known dinosaur burrow, reported from Cretaceous rocks of Montana (USA) in 2007. In short, trace fossils matter in paleontological hypotheses, whether for supporting new ones or knocking down old ones.
In science, we do not prove, we disprove, meaning that old stories are sometimes revised in the face of new evidence. Furthermore, answers always generate more questions, meaning that although we may get closer to the truth, we may never quite reach it, especially when we deal with events of the distant geologic past.
So in 2011, here’s to more disproving and more questions from trace fossils in Australia and elsewhere. Meanwhile, in the story titled The Mystery of Lark Quarry and the Case of Mistaken Dinosaur, the hypothesis is dead: long live the hypothesis! That is, until it is slain by more and better evidence. 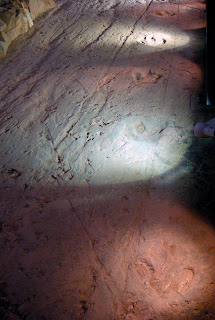 Stalking theropod or bumbling ornithopod? We used to be certain, now we're not. Welcome to ichnology, mates.
And just what is the evidence, and the scientific basis for this dramatic change in the story of the Lark Quarry dinosaur tracksite? That will be the topic of next week’s entry.
Posted by Anthony Martin at 1:08 PM