As an ichnologist, I have often witnessed and noted the contrasting enthusiasm of someone finding a dead body, versus finding clues that tell a story, but lack a body. No, I am not writing about a scene from some lurid U.S. crime show on TV (CSI, NCIS, Bones, ad nauseum). 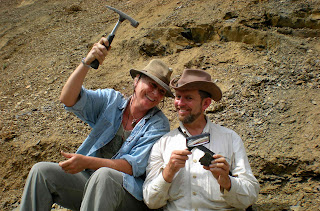 A crime scene in progress, where one fossil collector turns on another, either in a jealous rage over a recently discovered Cambrian trilobite, or (more likely) because the ichnologist (right) will not stop complaining about the lack of trace fossils in the rocks.
Instead, this is about the excitement that surrounds the discovery of a bone, shell, or other body fossil in the field, and how that interest stands in direct contrast to the discovery of a trace fossil, which may have been made by the very same animal that owned the body part.
Now, this is not to put down bones, shells, impressions, carbon films, or other fossils that reflect former bodily remains of plants and animals. I am likewise very happy to find body fossils, and become excited for my fellow paleontological practitioners when they uncover these, too. After all, let’s say you crack open a rock with a hammer, and that rock splits to reveal the remains of a once-living, once-breathing, once-reproducing, once-feeding (well, you get the idea) plant or animal. Then dig this (pun intended): yours are the first human eyes to see it since it shuffled its mortal coil and became one with the earth. How could any feeling human being not be excited by that thrill of discovery?
Paleontology in practice is an inclusive science, though, in which its participants ideally employ a combination of body fossils, trace fossils, and chemical fossils to reconstruct life before humans. Body fossils, appropriately enough, consist of body parts, and hence represent direct evidence of ancient life. Trace fossils normally do not include any body parts and are the products of behavior; these fossils are best represented by tracks, trails, burrows, nests, feces, toothmarks, scratchmarks, and other forms of indirect evidence. Chemical fossils consist of ratios of elements that tell you something was alive just before its elements were incorporated into an examined rock, such as stable isotopes of carbon (no, I will not explain that – but you can read about it here) or certain compounds called biomarkers.
So when given this list of possible fossils, which do you think paleontologists work with the most? Yes, you’re right: body fossils. Accordingly then, the paleontologists who receive the greatest public accolades for their finds are those who discover or describe body fossils. OK, so of these body fossils, which ones get the most attention from that same adoring public? Why yes, you’re right again: dinosaurs! Granted, an occasional fossil fish or mammal sneaks into the bright, shiny media spotlight, but a single dinosaur bone, especially of a large carnivore, can generate thousands of headlines, Facebook status updates, Tweets, and other digital shockwaves.

A single dinosaur bone – a pelvic bone, specifically – from the Cretaceous of Victoria, Australia that got a wee bit of public recognition recently. Why yes, it belongs to a large carnivore: why did you even have to ask? Image from Roger Benson of Cambridge University, and published by National Geographic. (And for you Yanks out there who refuse to use the metric system, 30 cm = 12 inches.)
On the other hand (or foot), a single track belonging to a dinosaur, especially of a carnivorous one, can also get some attention, but its fame may not last as long. For example, once I had found a couple of (not-so-good) large theropod tracks at the Dinosaur Dreaming dig site in Victoria, Australia in 2006, dig crews thereafter were on the alert for other tracks. So they started looking for something they previously did not think was there. (You never know until you look, even if sometimes you still haven’t found what you’re looking for.) And what do you know, they found one, and it was from a large theropod dinosaur. 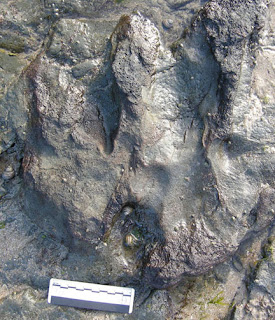 A single dinosaur track, probably of a large theropod dinosaur, found by volunteer Tyler Lamb at the Dinosaur Dreaming dig site in February 2007. And I mean, at the site, only a few meters away from where they were digging for dinosaur bones. Volunteers had been walking over it for about 14 years and had not noticed it, because, you know, it wasn’t a body fossil. Scale = 10 cm (4 inches).
Once a body fossil of a large carnivorous dinosaur was unveiled three years later, though, this track was not mentioned at all in news reports as previous evidence of large theropod dinosaurs living in that area at about that time. How fleeting the fame.
No, I’m not jealous of body fossils and the flashbulbs, red-carpet walks, bling, and swag bags they receive: I just want equal time for trace fossils. Consequently, in recent years I have been acting more and more as an “ichnoevangelist,” trying to convert the Great Unwashed who have not felt the daily transformative power of trace fossils in their lives. (As for paleontologists who study chemical fossils: sorry, you’re on your own.) I have even created my own “religion,” The Church of Ichnology, which has its holy trinity of Substrate, Anatomy, and Behavior (amen). (More will be said about that topic in a future post. But for now, also file away that this “church” requires drinking, dancing, and lots of cursing about body fossils.)
So let’s say you love body fossils, especially of dinosaurs, and are amenable to an ichnological conversion; in other words, you’re paleontologically bi-curious. Why should you care about dinosaur trace fossils, and especially dinosaur tracks? Let me count the ways:
• Dinosaur tracks are typically found in the exact same place where a dinosaur was living. Where you see a dinosaur track, that’s where it was walking (or, less commonly, running). On the other hand, bodies and bones can be moved far away from where an animal actually lived. For instance, where I live, in the state of Georgia (U.S.A.), all dinosaur body fossils there have been found in Cretaceous rocks that formed in shallow-marine environments. Yet all dinosaurs lived in terrestrial environments. This means these dinosaurs died on land, then their bodies were washed out to sea, where their bones were finally buried. 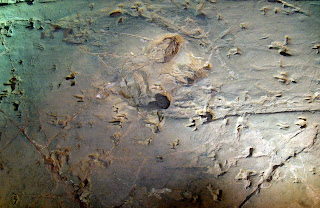 Close-up of a surface of Cretaceous rock that used to be soft sediments deposited on a lakeshore about 98 million years ago, in Queensland, Australia. See any dinosaur tracks? If you do, then you know those dinosaurs were living on that lakeshore (however temporarily).
• Dinosaur tracks are far more abundant than their bones. My esteemed colleagues who study dinosaur bones and make regular appearances on Oprah (or, more likely, The Colbert Report) will begrudgingly concede this point if I press them on it. Dinosaur ichnologists just have lots more fossils to work with. Of course, when you think about it, it’s not even fair to make the comparison. After all, one dinosaur could have made tens of thousands of tracks during its lifetime, but it’s various body parts may or may not have made it into the fossil record. The odds are lopsidedly stacked in favor of a paleontologist finding dinosaur tracks, not bones. Epic win for dinosaur ichnologists!

Panorama of Lark Quarry tracksite in Queensland, Australia from the mid-Cretaceous age (about 98 million-year-old). See all of those indentations on the surface? Almost all of those are dinosaur tracks. Number of dinosaur tracks on this 210-square meter rock surface? About 3,300. Number of dinosaur bones on this same surface? Zero. I rest my case, however anecdotally.
• Dinosaur tracks are often in places where you don’t find their bones. Let’s say you’re a paleontologist and you want to find some dinosaur bones. So you start by looking at sedimentary rocks of the right ages, which would be from the Late Triassic through Late Cretaceous Periods, or about 225-65 million years old. You also want to look at rocks formed in the right environments, such as rivers or lakes. (Yes, I mentioned earlier how dinosaur bones might be in rocks formed in marine environments, but these are much more rare.) Lastly, you’d like a place with lots of exposed rock that is not covered by pesky vegetation. 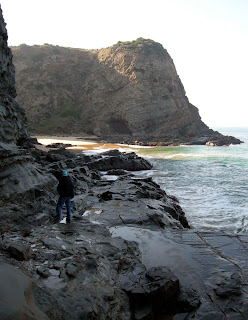 Why is this paleontologist (Tom Rich from the Museum of Victoria) looking for dinosaur bones along this dangerously slippery rocky platform inundated by smashing waves, and just below high cliffs that continually test gravitational theory by shedding excess boulders, which always seem to fall down instead of up? Could it be because these rocks represent the right age and right environments for dinosaurs, and are not covered by vegetation?
So let’s say you go down this checklist – check, check, check – and you still don’t find any bones. Well, you can blame this misfortune on the Great Goddess of Taphonomy, who decided that the dinosaur bones would not be deposited in those environments, or that they would be deposited, but have since been dissolved by acidic groundwater or otherwise had their elements recycled.
So you have places without dinosaur bones that really should have them? Start looking for dinosaur tracks instead. You just might find them.
• Dinosaur tracks can tell you exactly how a dinosaur was behaving on a given day. If you look at any given dinosaur bone, it can tell you something about how that animal lived. But this exercise often requires a lot of speculation, and usually fails to provide any “snapshots” of behavior on a given day in the Mesozoic Era, unless it has cool trace fossils in it, like toothmarks or carrion-beetle borings in it (which, incidentally, were not made by the dinosaur that owned the bone). In contrast, dinosaur tracks tell you the type of dinosaurs, their approximate sizes, how dinosaurs moved, how fast they were moving, when they stopped for a rest, if they had an injury, whether they were moving together, and other such important information that either supplements or surpasses information that can be gained from bones. 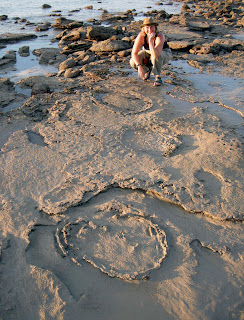 See those big, round impressions in Cretaceous rocks of Western Australia (near Broome)? Those are sauropod dinosaur tracks, and they indicate a probable presence of titanosaurs in an area where their bones have not been found (yet). My wife Ruth (a.k.a. Hallelujah Truth), a true convert to the Church of Ichnology, gazes upon these tracks with genuine awe.
So now that all of you are members of the Church of Ichnology and believe in the restorative and redemptive value of dinosaur tracks, you will appreciate next week’s topic all the more: the mystery of Lark Quarry – one of the most important dinosaur tracksites in the world – and how it was originally interpreted, then recently reinterpreted. Best of all, it’s in central Queensland, mates. See you then and there, but in the meantime, happy tracking!
Posted by Anthony Martin at 9:46 AM