“Discoveries are the currency of science.” When I heard renowned biologist and Pulitzer-Prize winning science author E.O. Wilson say these words several years ago during a visit to Emory University, I have reminded myself since of how the continuing discoveries of dinosaurs and other fossils probably reflect the most cost-effective way for science to progress. And when it comes to paleontology, few places in the world have yielded better “bang for the buck” than Australia. 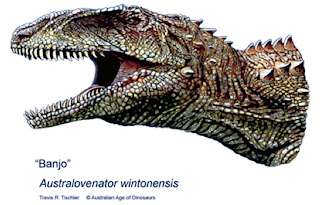 “G’Day! My name is Banjo. I have come here to chew bubblegum, and kick bum. And I'll all out of bubblegum.” Fantastic artwork by Travis Tischler, Australian Age of Dinosaurs.

In science and other realms of human inquiry, though, Australia has long operated under the handicap of “The Tyranny of Distance.” That is, its great size and geographic isolation from the other five inhabited continents has meant many of its scientific discoveries - particularly in paleontology - either lagged behind the rest of the world, or (worse) surpassed discoveries made elsewhere, yet were virtually ignored.
Exceptions abound, of course, including the discovery of Precambrian animal fossils from the Ediacara Hills of South Australia, first found in 1946. These fossils constituted abundant evidence for the oldest animal life on earth, from about 580-550 million years ago. Still, because these fossils were found in Australia, they seemed to require outside validation, and their true antiquity was not recognized until similar ones were noticed in rocks of the same age in England in 1957. 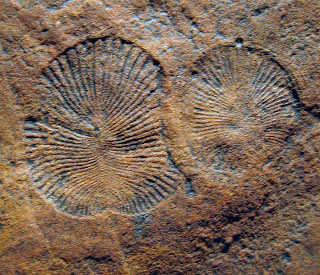 Two specimens of the wonderfully weird fossil Dickinsonia, a 550-million-year-old, flat, corrugated fossil “thing” from the Ediacaran Hills of South Australia. What is it? After more than 60 years of study, we’re still not sure, although we think it’s an animal. And it was first found in Australia. Specimens in the South Australia Museum.
Even the first dinosaur fossil discovered in Australia, a single theropod claw found in Victoria in 1903, had to travel thousands of kilometers to the Natural History Museum in London first before it could be verified as belonging to a dinosaur (which it did). Amazingly, dinosaur research stopped then and there in Australia, and more than 70 years passed before another dinosaur fossil was found in the same area.
In another example how Australia was the “Rodney Dangerfield” of countries in paleontology, a beautiful specimen of perhaps the most famous marine reptile discovered in Australia, the giant pliosaur Kronosaurus queenlandicus (mentioned in a previous entry, and to be discussed in a future one), does not even reside there. Instead, it is on display in the Harvard Museum of Natural History, transported out of Australia in 1932.
Fortunately, those days of being forsaken are long gone, and Australia is now more than ever on people’s maps for its scientifically significant (and majorly cool) paleontological discoveries. For example, in just the past few decades, the dinosaur discoveries from Cretaceous rocks of Victoria, which started in the late 1970s, has generated major scientific momentum in that part of the continent, and still lives on there with an annual dig site near Inverloch, Victoria (dubbed Dinosaur Dreaming). This dig and other excavations also led (unexpectedly) to Victoria becoming known as the most significant site for fossils of Mesozoic-age mammals in the Southern Hemisphere. 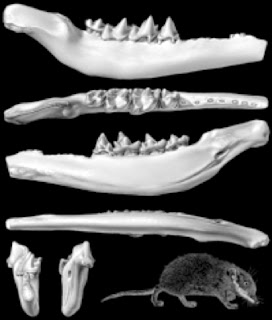 Take a look at this tiny, long-lost cousin of the kangaroos: a jaw from Ausktribosphenos nyktos, a marsupial that lived about 115 million years ago, found in Cretaceous rocks of Victoria. Amazing illustrations of the jaw and recreation of the animal are by renowned paleo-artist Peter Trusler.
Australia also has some superb fossil fish from the Devonian Period (nearly 400 million years ago), some of which have rewritten our understanding of early fish evolution. Some of the oldest stromatolites (algal colonies) in the world are from the Northern Territory and Western Australia, and living examples are in Western Australia at Shark Bay. Fossils of the largest lizards, land birds, and marsupials ever known are in many places throughout Australia as well.
(And not to sound like a “tall poppy,” but I threw in my $0.02 – depending on the exchange rate – to the paleontological knowledge of Australia in 2008 with the naming of the oldest fossil crayfish in the Southern Hemisphere, Palaeoechinastacus australianus (= “ancient spiny crayfish of Australia,” and I dare you to say that ten times really fast). Since 2006, I’ve also opened up a few more doors (or is that Pandora’s boxes?) by finding and describing trace fossils in Victoria, included the discovery of the first known large carnivorous dinosaurs tracks in southern Australia.)
But what about Queensland? It actually has been known for its vertebrate and invertebrate fossils for quite a while, including Kronosaurus, which was discovered in 1931. But it was not until the past 10 years that “dinosaur fever” (an incurable disease, incidentally) spread to Queensland in any way. Lark Quarry had already been known since the mid-1970s as a significant dinosaur tracksite, Muttaburrasaurus and Minmi were known from well-preserved skeletons, and a few sauropod bones were also found in the area during the 1970s. Otherwise, not much else had been recognized there. Well, this all changed with the discovery of more (and bigger, and varied) bones from 1999 onward. 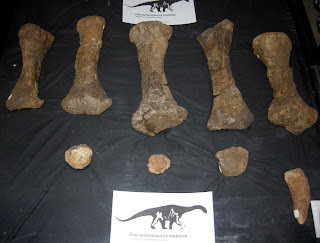 Look at the bones! Here’s a very small sample of the dinosaur bones recovered from Cretaceous rocks of Queensland in the past decade, on display at the Australian Age of Dinosaurs Centre near Winton.
Again, though, the “Tyranny of Distance” came into play in the recovery and description of these finds. Australia is a country with vast distances to cover, but with few people occupying those spaces: only about 23 million live within the borders of a landmass that’s just smaller than the lower 48 states of the U.S. So getting together volunteers who would go into the field, transport the right gear, and ensure enough supplies for maintaining the recovery efforts became very challenging. (Although at least they didn’t have killer waves, rock falls, explosives, and similar such challenges that characterized Dinosaur Cove, the first dinosaur dig site in Victoria.) 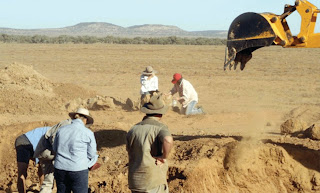 This is field work in Queensland. 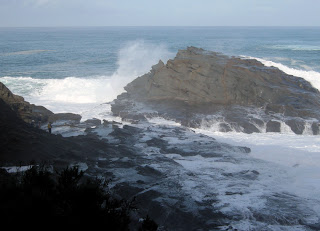 After several seasons of digging, solving of new problems that cropped up every day (sometimes solved by using heavy equipment that gulped lots of petrol), and large amounts of human labor, all fueled (no doubt) by many liters of beer, three dinosaur species emerged from the Cretaceous past of Queensland. 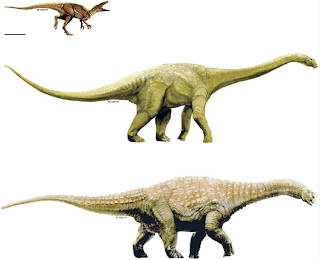 These dinosaurs were given genus and species names that had local cultural significance, explained later: Wintonotitan wattsi, Diamantinasaurus matildae, and Australovenator wintonensis. But they also were also given nicknames more amenable to the casual and easy-going nature of most Australians. (This is one of the main reasons why I keep going back there, although the great fossils may have something to do with it, too.)

Let’s start with the large sauropod dinosaur Wintonotitan wattsi (= “titan of Winton + Watts,” namely Keith Watts, who first discovered its bones in 1974). This dinosaur hase been nicknamed “Clancy.” Why “Clancy”? It’s from the title of a poem (Clancy of the Overflow) by Australian poet Banjo Patterson, an ode to the imagined advantages of life in the Outback versus the city. This “Clancy” had no such choice, and lived in a landscape filled with lush vegetation (ferns, gingkoes, and gymnosperms) that needed to recover and grow quickly enough to feed this 10-15 tonne titanosaur. Although this sounds like a big animal – which it was, when compared to modern elephants – it was much smaller than other titatnosaurs that left 1-2 meter (3.3-6.6 feet) wide tracks in Cretaceous rocks of Western Australia. Unfortunately, only the front limbs, ribs, and vertebrae have been found for this animal, with no skull (yet).

“Clancy” (Wintonotitan wattsi) shown as a recreation (top) and with representative bones (bottom); figures by Travis Tischler, and from Hocknull et al. (2009): PLoS One.

Diamantinasaurus matildae (= “reptile of Diamantina + Matilda) is another large sauropod, and its nickname is “Matilda.” Its species name and popular moniker are, of course, inspired by Australia’s unofficial national anthem, Waltzing Matilda, which was penned by famed poet and songwriter Banjo Patterson and performed first in Winton at the site of the North Gregory Hotel. Visiting American paleontologists have even been known to perform this song in public while staying at the North Gregory:

What amazing piano skills – his fingers aren’t even touching the keys! Video footage by Ruth Schowalter.

“Matilda” is a smaller but more robust sauropod than “Clancy,” possessing stouter limb bones: in other words, less like Kylie Minogue and more like Dame Edna Everage. Although the artistic recreation shows it with dermal armor – seen in other titatnosaurs – these parts have not been found (yet). How it occupied the same area at the same time as “Clancy” is an interesting ecological problem, because they probably were not competing for the same vegetation and nesting spaces: evolution often solves such problems through a process called niche partitioning.

“Matilda” (Diamantianasaurus matlidae), shown as a recreation (top) and with representative bones (bottom); figures by Travis Tischler, and from Hocknull et al. (2009): PLoS One.

Those two sauropods alone as species new to science would have put central Queensland on the map for Southern Hemisphere dinosaurs, but there’s one more species announced at the same time that generated worldwide attention: Australovenator wintonensis (= “southern hunter of Winton”), nicknamed “Banjo,” after not the musical instrument, but Banjo Patterson (mentioned earlier), who was nicknamed after the musical instrument). 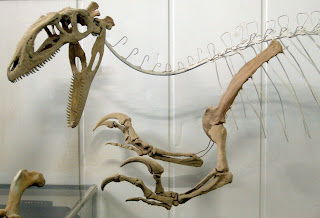 Remember me? And I’m still out of bubblegum, mate.

This was a lightly built (“lean and mean”) theropod that was a little smaller than Allosaurus fragilis from the Late Jurassic of North America, but would have made the Late Cretaceous Velociraptor mongoliensis look like a mere ankle biter (not that you should ever disregard the threat of a Velociraptor attack). Oh, so you need more information for this to be exciting for you? How about it was by far the most complete theropod dinosaur found in Australia? How about its well-developed grasping claws and arms, leaving no doubt about its predatory proclivities? How about its sharp, recurved and serrated teeth that show evidence of wear, meaning many critters got eaten by it?

“Banjo”” (Australovenator wintonensis) shown as a recreation (top) and with representative bones (bottom); figures by Travis Tischler, and from Hocknull et al. (2009): PLoS One.

Well, I could go on. So I will. “Banjo’s” bones were also found in the same oxbow-lake (billabong) deposit as “Matilda,” which meant they very likely lived (and died) at about the same time. Although we don’t know whether “Banjo” preyed or fed on “Matilda” – no such toothmarks have been found (yet) – we can say that they lived near rivers in that area. 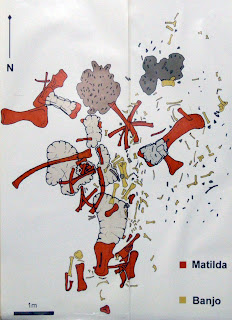 Color-coded bone map showing where “Matilda’s” bones were with relation to “Banjo’s” when uncovered in the field. Map on display at the Australian Age of Dinosaurs Centre. 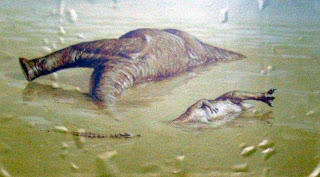 Artistic recreation of “Matilda” and “Banjo” together in that Cretaceous billabong, about 95 million years ago. On display at the Australian Age of Dinosaurs, and the artist was Laurie Beirne.

So as mentioned here last week, the age of Australian dinosaurs is now, and no doubt many more new and important fossils will be found in Cretaceous rocks of Queensland and Victoria, rewriting the geological history books. So what could be next, and especially from the world of trace fossils? Time to put on my ichnologist hat, and talk about that in next week’s entry.

In parting, let’s listen to Slim Dusty sing that famous Banjo Patterson song again, but this time, think of how, instead of jumbucks,  swagmen, and squatters, it conjures up dinosaurian ghosts of long-gone Cretaceous billabongs.